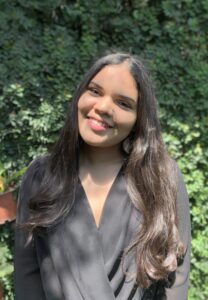 “The airport is near the highway so we would park right outside the runway and they would fly by really close to us,” Abadie remembered. “Whenever I saw them I always wondered how they worked and I was mesmerized by how big they were.”

There, with her papi at her side, her imagination took flight.

At home, they constructed model airplanes together.

“We would make these big planes and I really, really liked it,” she emphasized.

Abadie excelled in a Honduran bilingual school from kindergarten through high school. She knew she’d one day study engineering, with an eye on the aerospace industry. The plan not only cradled the wonder of her childhood, but also carried forward the long-held wish of her abuelo.

“My grandfather was an engineer and he always wanted one of his kids to become an engineer,” Abadie explained. “And unfortunately, none of them did. So I had that interest for engineering and I also thought about it as if I’m accomplishing his dreams of having another engineer in the family.”

When it was time to choose a program, Abadie honed in on Georgia Southern. Representatives from the University’s Office of International Programs visited her high school periodically and a number of her friends who attended the University shared stories of a diverse environment with open-ended opportunities.

“I know a lot of people who have come to Georgia Southern from my school and I’ve always had the impression that this school is very welcoming, especially for international students,” she said. “You get so many opportunities for professional development. And that really made me decide to come here.”

Today, Abadie is a junior on the Statesboro Campus who was awarded a $25,500 Women in Technology (WIT) Connect Campus Scholarship, presented by corporate and tech giants like State Farm, Coca-Cola and Splunk, earlier this year. It’s the organization’s largest scholarship to date.

A go-getter since arriving on the Statesboro Campus in 2019, Abadie immediately joined numerous organizations on campus, including the American Society of Mechanical Engineers, the Google Developers Student Club and WIT, a global organization that empowers girls and women to excel in science, technology, engineering, the arts and math (STEAM).

“Because of WIT, I’ve had a lot of opportunities for professional development and personal growth,” said Abadie. “I’ve had so many connections with the faculty here because of that organization. It’s something that I really encourage every single female in the STEAM industry to join. I’ve had so many good experiences, I’m speechless.”

The highly competitive WIT scholarship award arrived on the heels of two dedicated years as a student consecutively recognized on the President’s List for excellence in academics. She also served as the WIT secretary and sponsorship liaison for Southern Hacks, which presents an annual, three-day Hackathon for students to solve coding problems, attend curated workshops and network with industry professionals. This year, she is excited to serve as the lead organizer for the group.

In addition, she and a group of her peers recently launched the University’s first chapter of the Society of Hispanic Professional Engineers (SHPE), the nation’s largest association dedicated to fostering Hispanic leadership in the STEM field with training, mentorship and programming.

“That’s something we’re really looking forward to this semester because we just opened it,” said Abadie. “That will be an important thing this fall.”

With roughly 30 members already in place, the goal is to grow membership and attend the SHPE national conference in Florida in November.

“That conference has a lot to do with networking,” said Abadie. “As Hispanic students, it’s harder for us to get jobs, especially in the STEM industry, because we’re not citizens. Companies that hire us have to be willing to sponsor us and a lot don’t want to. The conference is a good way to make it through and get a lot more opportunities. Every single company that goes to that conference is aware that there are international students so they do offer those types of opportunities. That’s what I’m really looking forward to.”

Space exploration remains the pinnacle for Abadie. Yet, for now, she’s excited to fine-tune her interests and discover which industry sector most propels her.

“My dream job would be working at NASA or SpaceX,” she said. “I’ve always had that dream since I was a kid. I know that I really like the subject but I want to find a specific subject I’m passionate about and go from there. I really do believe I’m a hard worker so anything I put my mind to I always try to succeed.
“I want to make my family proud. I want to give back to them every single thing they’ve given to me so far and make them proud.”