Jam Social Media Lab was born from the philosophy that two (or more!) brains are better than one.That’s the intro you get from partners Jillian Stafford and  Marc Bigbie,  the dream team behind the city of Savannah’s very first dedicated social media marketing agency. With over 15 years of combined experience, they’ve been in the social media world for a really, really long time, having worked with some of the most recognizable brands in Savannah, as well as nationally recognized companies. The full service company is a one-stop shop for any business looking to grow their brand. With a team made up of writers, graphic artists, videographers, photographers, and marketers, Jam Social Media is able to tell the story of any business in a way only unique to that business. We were lucky enough to sit down with human juggernaut and Jam leader, Jillian Stafford, on what it takes to run a business and how they are creating a  work culture all their own. 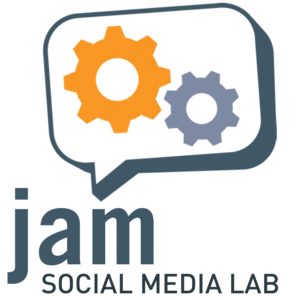 The Creative Coast: So talk to us about Social Media Jam.  Jillian Stafford: I started out as a freelancer awhile ago, it was maybe like eight years ago, and I was a graphic designer and that’s a difficult field to be in in Savannah because there are a lot of SCAD kids that will work for pennies on the dollar so that they can fill their portfolio. While I appreciate their hustle, it was difficult to make money as a graphic designer in this town unless you’re super super awesome; which I was super super not. At that point Twitter had just launched, and I was like, “Oh, there might be something to this.” And I just started trying to figure out how I can make that into a business model cause people were using it to connect to each other, why wouldn’t people use it to connect with other businesses? So I started doing that. My first client was a hair salon, and I was running their Myspace page. We also dabbled in Facebook and Twitter, but they had a lot of Myspace friends and that was my first dip of my toe into the water. And from there I just sort of built and built and built and actually my first recognizable client that I landed was six years ago. I actually got to create a code, Jake Hodesh at The Creative Coast hired me, and I was doing that, and I was really happy. Then my next big client, which was my jumping off client and the rest of the business world, was Parker’s. Greg Parker and his marketing department took a chance on me, and it clearly worked because five years later, I’m still there. I just love working with them. They’re amazing to work with.

From there I just built and built and built. More demand started coming in and I wanted to expand and grow, but I was stuck at the point I was at. Then one day, a long time family friend randomly sent me an email and was like, “Let’s talk about some stuff. I see you’re growing and doing stuff, but you need to partner if you want to grow. You need help and I would love to help you.” My business partner and I started rolling along and building a business. Earlier this year we got to the same point, we were at the same crossroads I was before, where I was like, “Well, I’ve got a certain number of hours in the day and no more work that I can do.” So he thought, “Alright, well we need to hire someone.” And in that time I had been watching Jen work over at Creative Approach, and I knew that she knew what she was doing. So now it’s me and my partner Gen and we’ve got two interns. We just love and adore them, and we got so so lucky so, we’ve got a really amazing crew right now. The Creative Coast: Something that we hear a lot from folks, especially folks who are just starting out, is the story that they hear and the story that is. And I think the story that they hear is “ I was working or doing something. I wasn’t happy. I wanted to start my own thing. Then tada! I became this magic business owner.” So much of the process in the middle gets lost and how that often looks like a lot of tripping, and falling, and swerving, taking a U-turn. Right? So I think for folks to hear those stories and hear those experiences are really hopeful. JS: Yes! What’s funny is now I hear people that are like, “Oh, yeah. I hear there’s all this money in social media. I’m gonna get into this and making $150,000 a year in like months.” And I’m just like, “Oh… Let me tell you how it took me 8 years to get where I am.” And from a time where it was pretty much me and two other people were the only people in town doing this and it was still just clawing every day trying to get it. [gallery size="large" ids="86549,86541,86540"]   CC: On one hand it sounds like it can be a tough nut to crack, but also you’ve kind of figured out where the gap is and how you can sort of navigate that. So, how does that work for you in so far as a business owner. JS: At first I was just doing full service social. The plan, the execution, the engagement, all of it fell on my shoulders. That’s actually how I prefer to work. But I’d also go to meetings all the time, and every meeting I would learn something about the business owners in Savannah. Some people would have somebody in house that they really liked, but they were doing not a great job and so I found a way to overcome that objection. I would find people that had a whole marketing team in place and the ability to do it, they just didn’t have a skill, so I found another solution for those people. I started finding ways to help different people and then finding ways to set myself apart. One of the ways I set myself apart was we’re really good at writing content, choosing content, planning stuff. We’re really good with Facebook ads, which is like a rabbit hole that goes all the way down. We also do everything in house. We do full service video production, photography, graphic design. We’ve got writers, so we’ll do blogs, we’ll do everything in house. We even have professional drone license. We don’t outsource stuff. If there’s something you need urgently, you call my cell phone number, I’ll be at your office that day to produce a video. We charge kind of a premium fee, but because of that, you get a premium service. CC: Why Savannah though? The question that we are constantly asking people is, you have this skill set, you have this talent set, you could go anywhere else, you could go to any sort of urban enclave, and it’s sexy, and it’s cool, and it’s got great public transportation and vegan donuts, and whatever, right? Why choose Savannah to not only stay and live here, but then grow your business here. JS: We have vegan donuts here in Savannah now! CC: We do have vegan donuts here. People are always like, “We have them now!” JS: So I grew up in Miami, and I moved here from Orlando. Coming to Savannah 10 years ago was a huge change for me and at first I was very resistant to it. Eventually I grew to love it. I like how everyone knows each other. It’s very easy to network and make connections and as long as you behave like a good,` kind person, and you don’t hurt other people or do other people wrong, it’s very easy to cultivate relationships that are very valuable, especially in the business world. I like the small town aspect of it. I am working with businesses out of town, because Savannah’s only so big, but I like to be here. 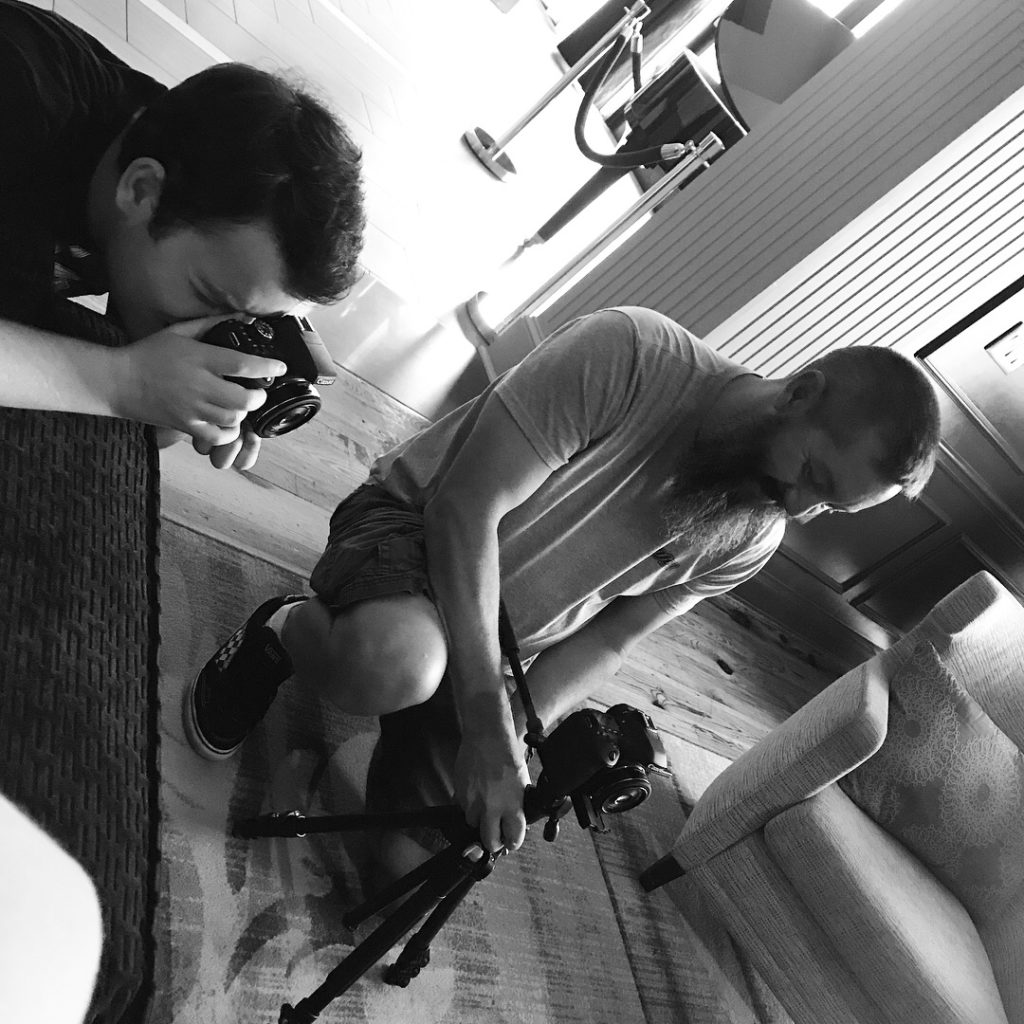 CC: So, last question. One of the really cool things that is becoming more and more visible, is that as more and more people sort of step into their businesses and become influencers, that they’re able to sort of help craft a little bit of a new culture here in Savannah, and that can be work place culture or that can just be the culture of doing things. How are y’all modeling a culture of what you want to see in Savannah? JS: Our culture that are probably pretty different from those people, especially people that have been interviewed here. We don’t have a downtown office because none of us live downtown, and the traffic getting into downtown is skull crushing. We’re in the suburbs, its great. Our work weeks are very relaxed, because when we do social media, it doesn’t sleep. It’s always going, it’s always happening. I can’t ask my team to constantly be on call to answer questions for a restaurant, or whatever, at 10 o’ clock at night on a Friday, if I’m asking them to be chained to a desk 40 hours a week. So, we do flex time in the office. I think office time is really important, especially as an agency because we can collaborate and have great ideas together, and I love that, but at the same time I don’t want to make people sit there if that’s not when the work is happening. You have to make people feel like they are valued, and you love them. I feel like I tell Jen every day that she’s the best. Or I try to. I don’t think I’ve told you that today, but you’re the best. And our interns, I love them like my own children. They are amazing and I tell them all the time and I send them little text messages like, “You complete me!” Because I think that if you make people feel like they are valued, especially if you honestly authentically value people, they’ll value you back and they’ll give you work that really quality and they’ll try really hard. If you don’t feel like someone cares about you and what you’re doing, then you’re not gonna do a great job. We don’t do that. We cultivate a culture of appreciation and valuing, every single day. Check out all the great things Social Media Jam does at: http://www.jamsocialmedialab.com]]>