Last week, The Creative Coast teamed up with the Girls Who Code (GWC) Savannah Chapter to offer Savannah’s first marine-science-themed Girls Code Games Summer Camp. From July 11th to July 15th, over 30 girls from 20 Chatham County schools worked alongside female marine scientists, professors, instructors, and counselors to learn coding skills for the first time. The GWC camp took place at both the UGA Institute of Oceanography and Georgia Southern University’s Armstrong Campus. Throughout the week-long camp, which ran from 9 a.m. to 2 p.m. each day, the group of 5th to 8th grade participants learned about underwater robotics and worked to build their own marine-themed video games. 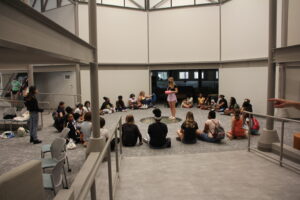 Sage Batchelor, a current high schooler at Savannah Arts Academy, ran the camp as the lead instructor. Batchelor has worked with the GWC Savannah Chapter as the co-founder since its inception several years ago. Over the years she has run Saturday fall, winter, and spring workshops teaching girls and Savannah youth how to program fun projects to peak their interest in coding. This year’s summer camp provided a one-of-a-kind experience for Savannah’s youth to learn about and tie different sciences together in a final computer-based project. 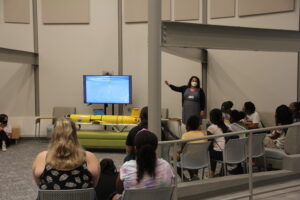 The first day of camp was spent at the Skidaway Marine Science Center, where campers learned how coding is used in underwater robots to study oceans. Dr. Catherine Edwards, Associate Professor and Researcher of Coastal Physical Oceanography and Marine Robotics at the UGA Institute of Oceanography, led the session. Campers also learned about how the bots are engineered and factors the scientists must consider when navigating the ocean waters, including potential encounters with ocean wildlife.

The next day, campers began working with Batchelor and four teaching assistants to design a game based on the information they learned at the UGA Institute of Oceanography. Teacher’s assistants included Jooyoung Oh, Michelle Ngo, Morelia Lopez-Marquez, and Eden Sills.  Also present was interactive design and game development professor, Sari Gilbert, who guided the team. In order to code the games, attendees were introduced to Scratch, an easy-to-use block-based programming toolkit from MIT that was designed for youth and beginner coders.

After visiting the UGA Marine Institute of Oceanography, the campers spent the rest of the week designing video games based on robots of the same nature. [Photo: Robert Batchelor]

On days three and four campers implemented their designs. Each camper created an individualized video game that featured steering an underwater robot that looked exactly like the one used by the UGA Institute of Oceanography through currents and ocean life to achieve a unique goal. The week culminated in a completed marine-themed video game that was shared with the entire camp in a graduation ceremony honoring the young coders.

According to GWC Savannah, the camp’s mission is to work to close the gender gap in technology and to change the common perception of what a programmer looks like. Though this was the camp’s inaugural year, interest was strong, and camp coordinators received over 100 applications. To more fully accommodate the high level of interest, the camp opened 20 more spots to double the number of youth served.

Sponsors of the event included the City of Savannah, which assisted The Creative Coast in providing food, counselor stipends, and coordinating aspects of the camp. Georgia Southern Business Innovation Group (BiG) provided accommodations and computers for the camp, and the UGA Institute of Oceanography provided its grounds and staff at the beginning of the camp. Elevate Savannah sponsored the event by providing free transportation to the Skidaway Marine Science Center for campers. Robert Batchelor, Professor of History and Director of Digital Humanities at Georgia Southern University, provided vital assistance, guidance, and photography throughout camp as well. 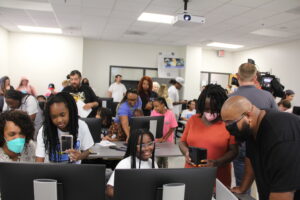 Photo: Robert Batchelor
Girls Code Games concluded with a graduation ceremony during which campers showcased their creations to friends and family.

To learn more about Girls Who Code, their mission, and their programs, visit https://girlswhocode.com/. To receive updates about the next GWC Savannah program, fill out this form.