Ben Youngstrom is ready to change the world. But he’s doing it in his own unique way: by bringing 3D printing to developing nations.

His company, Mercury Mobile Printers, recently won first place at The Creative Coast’s Fast Pitch event, where he had five minutes to speak directly to potential investors and sell them on his mission. I sat down to speak with him about the inspiration behind his project. 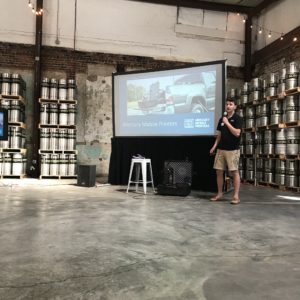 “In my pitch, I started with a story about my friend who had gone on a mission trip to Kenya,” Youngstrom says. “They arrived in a village to work on a [water] pump. A lot of charities like building new things, but that new stuff breaks, and then nobody knows how to fix it.”

He continues,  “So that group goes by and actually fixes the infrastructure. They went to work on a pump that was broken and they looked at it and it was a fairly simple part that broke, but they couldn’t really McGuyver a replacement. So they ended up ordering a part.”

Youngstrom shakes his head, with a dejected look on his face. “It took about a month to arrive, and they installed it in an afternoon,” he explains. “They went in and spent the expenses of staying in an area for a month to do something that could’ve been done in an afternoon. So this project was born off of the opportunity to change that. To make it so that it’s printed in a couple of hours, installed in an afternoon and what traditionally is a month’s operation is a day’s operation.”

“It sounds like something that could even be an hour’s operation,” I say.

Youngstrom nods his head in agreement. “So it was genuinely something to increase that efficiency. This project was an opportunity to combine my love of building projects with something that really does genuinely provide a positive impact.”

Youngstrom believes that Mercury Mobile has the potential to grow and help communities universally.

“Traditionally we’re always saying parts of Africa, parts of Central America, parts of Asia,” he explains. “But it’s really wherever people are looking to circumnavigate corrupt governments or poorly built or maintained infrastructure.” He laughs, saying, “which includes places in the United States,  places all over the world! So really, anywhere that people can’t consistently rely on shipping, we think this platform can play a huge part in improving their lives.”

Mercury Mobile isn’t just pigeon-holed to fortifying the infrastructure in the developing world.

“We’re currently on the waitlist for a government grant to help provide our platform to manufacture prosthetics right here in the United States,” Youngstrom says. “These are notorious for how expensive they are—Actually, would you give me just a minute?” he asks.

Youngstrom runs off-screen for a moment. I can hear several loud bangs as he moves around in the background, looking for something.

He returns, holding a hand. Not a real hand of course, but a prosthetic hand he 3D printed himself. It features complex, realistic joints at the knuckles and wrist. The hand features a bright gray background with splashes of royal blue interspersed along the fingers with hints of neon green just barely visible through the joints. 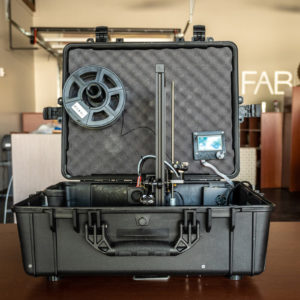 “So this is a fully functioning prosthetic,” he says. “Every part of it from the fingers to these moving joints, all of it was 3D printed through our platform.”

I’m fascinated by the functionality and complexity of the prosthetic he’s holding. The prosthetic industry is, as Youngstrom mentioned, notorious for the high costs of its product.

“How much would something like this cost for you to make?” I ask.

“This would cost $60 max,” he says. “Depending on the rate of use, you could get a couple of months, four to five months of use. It’s not forever, but it’s long enough for a farmer who lost his hand in a combine to work through the rest of the season he needs to pay his bills. It provides enough time for you to accomplish major goals.”

Youngstrom and his team are working to finalize the development of the software system that will pair with the 3D printer. They released the Mercury Generation 1 Printer in September of 2020. But he’s already envisioning the future of where his product will be able to go.

There are still challenges ahead for Youngstrom, but he remains optimistic.

“I think I’m finally beginning to approach the vision with this, because we really want to do something huge with this platform,” Youngstrom says. ”Like something that genuinely creates some positive change, and we’re finally starting to get there.”

Keep up to date with Ben’s endeavors with Mercury Mobile Printers here.