Each year, The Creative Coast aims to coordinate a STEM summer camp with Chatham County recreational centers. This summer, The Creative Coast teamed up with Operation One STEM at a Time’s founder Ambria Berksteiner to run two four-day workshops to help students explore concepts in chemistry, biology, and engineering. The workshops, known collectively as Mad Scientist Summer Camp, were held at the Pennsylvania Avenue Resource Center (PARC) and W.W. Law.  PARC’s STEM camp ran from June 6-9th and W.W. Law’s camp ran from July 11-14th. Over 40 Savannah youth were served between the two camps. 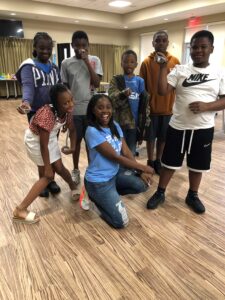 Ambria Berksteiner (Front and center) and campers at PARC’s Mad Scientist Summer Camp sessions hosted in coordination between Operation Changing the World One STEM at a Time and The Creative Coast.

Operation One STEM at a Time is a local program that works to educate, enlighten and empower young women of color to explore and pursue STEM careers. Berksteiner is an engineer and Savannah-native who founded Operation One STEM at a Time in 2016 in order to teach other young women of color that they can work in any field they desire. While the focus of the organization is largely on its work with girls in STEM, this summer’s workshops served both boys and girls ranging from elementary to high school ages. 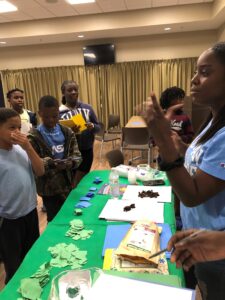 Ambria Berksteiner, Founder of Operation Changing the World One STEM at a Time, teaches youth at PARC’s summer camp how to make seed bombs.

Each day of Mad Scientist Summer Camp featured a different topic that was STEM-based and accessible for students or varying ages. On the first day of camp, participants learned about botany and created seed bombs, or balls of wildflowers, soil, and construction paper that the campers could throw on the ground to disperse seeds.

On the second day, campers were shown how circuits work and used copper tape, diodes, and a cell battery to create light-up name tags and cards. Day three of camp involved a project with arcade claw machines where attendees learned how to build a hydraulic claw using TeacherGeek’s creative build system. The activity provided campers a variety of ways to build and modify their hydraulic claws so that each claw was unique.

On the final day of workshops, campers had their pick of chemistry-related projects and floated between several STEM stations. Attendees applied scientific concepts to tie-dye tote bags, concoct slime, and even create a milkshake.