Skip to content
SAVANNAH, Ga., February 11, 2022 — When Georgia Southern University student Hannah Whitehead first walked into the new Junior Achievement (JA) Colonial Group Discovery Center, she was in awe as she took in the sight of a small-scale Savannah community before her.
“When I walked into the space, I was so shocked and inspired by it all, and I stopped to think about what sixth through eighth-graders would do when they walked into that space,” said Whitehead, a senior communications arts student from DeKalb County, Georgia.

JA Discovery Centers blend key components of education to create state-of-the-art learning facilities where students apply concepts they learn in the classroom in a 360-degree authentic and immersive experience. Upon arrival, middle school students become part of a simulated version of their hometown within the JA BizTown and JA Finance Park programs.

Located on the Armstrong Campus in Savannah, the JA Colonial Group Discovery Center is the first center of its kind to be developed on a university campus and the first to utilize college students such as Whitehead as instructors. The center will employ about 45 Georgia Southern students as interns and instructors each semester. Discovery Center instructors are usually volunteers, but this center uses Georgia Southern students as interns, paid as Dulany Waters Leadership Scholars thanks to private support from local donors. 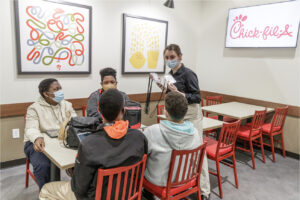 “Georgia Southern is proud to offer a space for the Junior Achievement Colonial Group Discovery Center where middle school students from our region and our own students can both learn from each other and gain valuable skills,” said Georgia Southern University President Kyle Marrero. “The center is an example of the transformative power of education that will impact these students for years to come.”

It’s in this space where 125 middle school students from around coastal Georgia will learn from Georgia Southern students such as Whitehead, as they develop a greater understanding of financial concepts, build 21st-century skills and foster their entrepreneurial spirit.

The Scholars will coach small groups of students invaluable lesson discussions, and navigate the middle school students through the simulations each day.

“We’re all just really, really excited to see their reactions and, hopefully, we can make it a really good experience for them when they come in,” said Whitehead.

Whitehead looks forward to playing a role in the big ideas that the middle school students will be able to discover while at the center on campus.

“Not many people get the opportunity to do this,” Whitehead said. “In middle school, when you’re absorbing so much information, you’re able to learn that financial literacy is a big thing. So it was really exciting for me to see that kids could have this opportunity that not many of the people nor me got so I think that was the biggest thing.”

Scholars such as Leviticus Collins, a senior communications arts student from Hiawassee, Georgia, said being a Scholar provides real-world work experience and allows him to teach others. 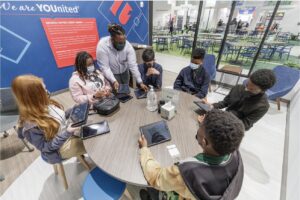 “When I see those kids that are a little shy, the best way to get them into the simulation and to interact with the rest of their peers is to make them the peer leaders,” he said. “So that way they’re held responsible by the rest of the group, and I think that’s going to be the best way to keep them interested in the program.”

The center is built in the space formerly used as the Student Recreation Center. A grand opening will be held today at 4 p.m. on the Armstrong Campus in Savannah. The public is invited.
Georgia Southern University, a public Carnegie Doctoral/R2 institution founded in 1906, offers approximately 140 different degree programs serving more than 27,000 students through 10 colleges on three campuses in Statesboro, Savannah, Hinesville and online instruction. A leader in higher education in southeast Georgia, the University provides a diverse student population with expert faculty, world-class scholarship and hands-on learning opportunities. Georgia Southern creates lifelong learners who serve as responsible scholars, leaders and stewards in their communities. Visit GeorgiaSouthern.edu.
Sign up for The Creative Coast’s weekly newsletter to get all of our featured news stories on innovation and startups in the coastal region delivered to your inbox.
Posted in Featured, News, Youth and tagged JA Colonial Discovery Center of Savannah, JA of Georgia, Junior Achievement