SAVANNAH, GA – The Creative Coast closed 2022 with its final program of the year: the Girls Code Games Holiday Camp. The educational camp took place from December 19th to 22nd and provided a free opportunity for over twenty 5th to 8th-grade girls to learn how to code video games using MIT Scratch. The camp wrapped with a party showcasing the campers’ final game creations and a $22,500 funding announcement from the Howmet Aerospace Foundation.

The Howmet Aerospace Foundation is the independently endowed charitable arm of Howmet Aerospace, an American company that engineers and manufactures metal components for the aerospace industry. Each year it grants over $7 million to its global nonprofit partners. The foundation specifically invests in STEM and technical education and workforce development initiatives, with an emphasis on increased access to STEM fields for underrepresented individuals. 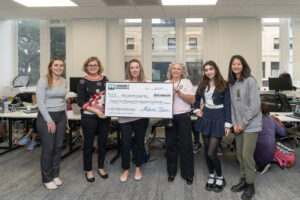 The Howmet Aerospace Foundation funded the December camp and committed to supporting three Girls Code camps or workshop segments per year in 2023 and 2024 for a total of $22,500 in funding. The grant money will be used to teach up to 90 girls in the coastal Georgia region each year about coding and different fields in the industry to cultivate their curiosity in computer science and programming.

Representatives from the Howmet Women’s Network attended the Girls Code Games Holiday camp wrap party to announce the funding. Melinda Green, who is the Plant Sales Lead, and Julie Freitas, the Plant Controller for Savannah Aerospace Operations were on hand to see the girls’ projects. Melinda is the Chair for Howmet Women’s Network at the Savannah location and was the impetus for the foundation funding Girls Code. Green shared her excitement about the Howmet Aerospace Foundation’s partnership with The Creatives Coast.

“I was excited to come across this organization and the Girls Code Program,” she said. “I knew it was a perfect fit for our Women network’s vision in empowering young women/girls in STEM learning opportunities. Being a female in manufacturing we are trying to educate more students about the opportunities that are available to them as they are thinking about their future careers.”

Creative Coast Executive Director Jen Bonnett stated that the invaluable partnership with Howmet Aerospace will help meet the overarching mission of Girls Code, which is to ensure that “all girls are learning to code and have the opportunity to pursue high-wage tech jobs in the future.”

An important element of the Girls Code program is that participants have the opportunity to learn from women developers and engineers. Last summer, campers were able to hear from the women scientists at the UGA Skidway Institute of Oceanography building and coding underwater robots that collect essential data from our oceans. Due to funding from the Howmet Aerospace Foundation, campers will take these field trips during summer sessions to learn from women in STEM and experience what it’s like working as a computer programmer in different industries. 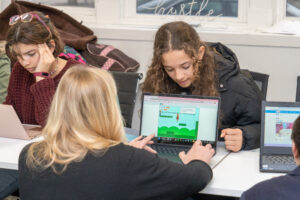 A camper shows her completed game during the Girls Code Games Holiday Camp Showcase. Over 20 girls participated in the code education camp.

Campers will also continue to learn from high school instructors and teaching assistants who have attended and graduated from the Girls Code program. Graduating into a camp counselor role gives a camper the chance to continue fostering their coding skills, and in a paid leadership role, beyond the 8th-grade cutoff for Girls Code.

Interested in signing your 5th to 8th grader up for the next round of sessions? Stay tuned to https://thecreativecoast.org/programs/girlscode/ for upcoming announcements.

About the Howmet Aerospace Foundation

Kait has been writing for The Creative Coast since 2014. A self-proclaimed "startup hype-woman," Kait is passionate about storytelling that shines a light on new ideas, innovation, and entrepreneurial opportunities in the southeastern Georgia region.

View all posts by Kait Lance →