On Saturday, April 23rd, the Mechanical Engineering Department on the Armstrong Campus of Georgia Southern University (GSU) hosted the Engineering Design Challenge (EDC) in-person for the first time in three years. Seven teams of Georgia high school students competed in EDC 2022: Eagle-3D, which required each team to work with a provided 3-D printer in the months leading up to the event and to present their final work to a live audience.

“It’s a great opportunity for [the GS Project Coaches],” said Dr. Wayne Johnson, Professor in the Mechanical Engineering Department at GSU and EDC Project Director, who presided over the competition. “They’re able to gain experience with project management, and they also get the opportunity to apply what they’ve learned in their courses. For this project, it relies a lot on skills learned in their Engineering graphics classes, like CAD modeling.”

Dr. Johnson also explained how each GS Project Coach acquired valuable skills and real-world experience that could help set them apart in job applications and interviews. “For a lot of companies who are looking for engineers, everybody’s got good grades, but what will distinguish you from everybody else?” said Dr. Johnson. “[GS Project Coaches] can talk about how they managed a team of budding engineers, drove multiple times per week to a high school, and gained experience with time management skills.”

During EDC, each team of high schoolers was given ten minutes to present their work. Teams were judged on several criteria, including content, complexity, organization, and delivery. Judges considered how well students explained the 3-D printing process, what functional and aesthetic modifications they made to their 3-D printers, what they fabricated with their 3-D printers, and how well they described the design and fabrication process of their final items. A key restriction for each team was that final fabrications could not include more than ten individual parts.

Each team presented their work using a combination of speech and PowerPoint slides. During intermission, judges convened to rank each team according to rubric criteria and Freedom, GSU’s live eagle mascot, made a special guest appearance. 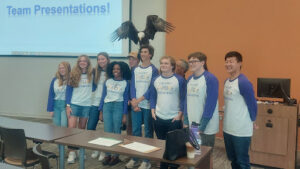 First runner-up was awarded to H.V. Jenkins High School (Team 1) for their presentation on their 3-D printer, which they used to fabricate a stackable twist lunch container at a 1:2 scale to the original. Team members included Godwill Agbehonou, Dan Ha, Isabella Millan, Brandon Parker, and Anshkumar Patel. The GS Project Coast for H.V. Jenkins High School (Team 1) was Micah Turner.

Judges awarded second runner-up to H.V. Jenkins High School (Team 2) for their presentation on 3-D printing, printer modifications, and their creation of a 3-D printed socket wrench. The team consisted of Richard Ortiz, Tillman Clark, and Maitreya Kayyar. GS Project Coach Tyler Nagy provided mentorship to the students in the months leading up to the competition. 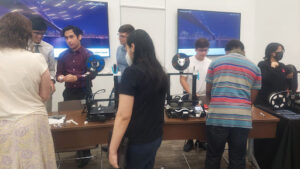 The eight in-person judges at the event came from a variety of engineering backgrounds and companies, including Gulfstream Aerospace, Great Dane, and Clark Construction Group, LLC. Four of the in-person judges, Cameron Anthony, Rebecca Klein, Jeff Mitchell, and Joseph Pham, are GSU alumni. Additional judges were recognized for their virtual judging of each team’s how-to video.

In speaking with Dr. Johnson about the value of EDC for each team, he discussed the importance of the competition as a way for students to begin exploring opportunities in engineering and to begin networking while still in high school. “Students realize that they have the ability to actually pursue a STEM career,” said Dr. Johnson. “The projects that they’re working on are easily scalable to what an actual professional engineer would be working on.”

Dr. Johnson also highlighted how EDC works to show potential GSU students what the university has to offer them. “We want to get the word out that we’re here, and that they can get their engineering career started right here in Savannah where they have access to internship opportunities and more,” said Dr. Johnson. “It’s a way to promote our program as well.”

Sponsors of the event included the Georgia Space Grant Consortium, NASA, Gulfstream Aerospace, and GSU’s Engineering Department. In closing, Dr. Johnson emphasized the importance of the event’s supporters. “Gulfstream has been a long-term supporter of our program,” said Dr. Johnson, “and the Georgia Space Grant Consortium through NASA has been very instrumental in helping us to have this program.”