FastPitch returned this year at Service Brewing in Savannah for an afternoon of business pitches, prize money, and networking opportunities. The business pitch competition, now in its tenth year, is run by The Creative Coast and features graduates of The Creative Coast’s Idea Accelerator Bootcamp and students that participated in startup pitch events at the Savannah College of Art and Design (SCAD) and Savannah State University (SSU). Jennifer Bonnett, Executive Director at The Creative Coast, presided over the 2022 event.

This year, nine businesses participated in front of a live audience for the chance to win three cash prizes based on audience votes. Each participant was given five to seven minutes to pitch their business plans using a slide deck. Leading up to FastPitch, each business benefited from one-on-one mentorship from experienced business mentors.

After pitches were complete, the audience took a break to vote. First place was awarded to Jordan Sampson for the growth of her business, Sampson Digital Media Management and Consultation. Sampson, a current SSU student, was also the first place winner at Savannah State University’s Tiger’s Den Business Pitch Competition in April. Sampson Digital Media Management and Consultation is a company that specializes in social media management for small companies looking to harness social media and analytics to boost the success of their business. In her pitch, Sampson detailed how prize money would help her expand her business by allowing her to hire a creative team, including a graphic designer, photographer, and videographer. For her pitch, Sampson was awarded $3,000 in seed money. 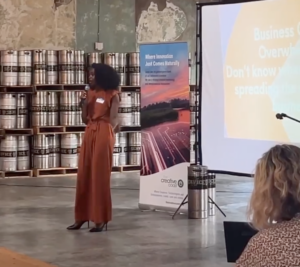 Second place was awarded to Fable Appliances, LLC, a team made up of SCAD students Adrienne Krozeck, Erin Marshall, and Maddie Muchman. Fable was awarded $2,000 for their business plan, which includes the creation of a home hydroponic system meant to normalize home gardening and help solve the issue of food insecurity, especially as it relates to projected population growth and lack of farmable soil. The team outlined projected costs of a beta version of the appliance, which is designed similarly to a refrigerator, and showcased how the appliance would save consumers money over several years. Leading up to FastPitch, Fable Appliances, LLC also won SCAD’s startup pitch event.

Sade Shofidiya, CEO at BEEnevolent Systems, LLC won third place and $1,000 in seed money for her business pitch. BEEnevolent works to solve the issue of declining bee populations by manufacturing and selling solar-powered bee hives that are connected to the BEEnevolent app. The app will provide users with analytics on bee health and other features to help maintain the health of the hive. In her pitch, Shofidiya highlighted the interest BEEnevolent has already received from the United States Department of Agriculture and the support received from other backers. Shofidiya, an MBA graduate, also placed at the SSU Alumni Business Pitch Competition in 2021.

The six additional competitors at FastPitch 2022 were:

FastPitch 2022 is made possible by a variety of sponsors, including the Savannah Economic Development Authority, Plug and Play, ATDC Georgia Tech, Savannah State University Center for Innovation and Entrepreneurship (CIE), Georgia Southern University Business Innovation Group (BiG), and the City of Savannah. This year’s Startup Sponsors were Built with Purpose, Walla Wallet, and Menther.