Inky Brittany, whose one-woman graphic facilitation show is here to save us all from one more boring meeting. Brittany Curry, owner of Inky Brittany, is a Savannah native and admitted life-long doodler. In 2012, she became the coordinator of Oconee Area Citizen Advocacy, a grassroots community organization that brings together a person with a disability and a fellow citizen who will speak up for them and include them in community life. But also in 2012, she attended a workshop at the Toronto Summer Institute for Inclusion where she learned about graphic recording, the use of large-scale visual imagery to communicate and help lead groups and individuals through a process. Over the next several months, she began trying out the skill of recording meetings live in front of groups of people. The network of people requesting this service grew into the creation of a full-time business, InkyBrittany. Now, just a few years later, Inky Brittany has become an in-demand service and Curry works with everyone from grassroots advocacy groups, to universities and institutions. We were lucky enough to be able to sit down with Curry to talk about her exceptional journey into the world of graphic recording.   Creative Coast: Talk to us a little bit about your genesis story for starting Inky Brittany because it’s a little bit different, but also it’s really important for folks to know. Brittany Curry: I was working for the Citizen Advocacy office in Milledgeville as my first job out of college. It was job recruiting, advocate for people with developmental disabilities, people who had been institutionalized, and were being forced to move out of their communities. It was through that job I met people that were using visuals during sort of the planning meetings for people with disabilities. The use of visuals helped to galvanize, support, or help people see in a different way. In other words, it helped people from getting stuck in sort of a case plan as usual. That was how I learned about the field of visual practice from people that I met in the disability advocacy world. I started around 2012 just kind of playing with it and offering it at different places, different meetings, and saying can I try this out, volunteer this as a skill. Over two or three years, it literally grew into a full time business. 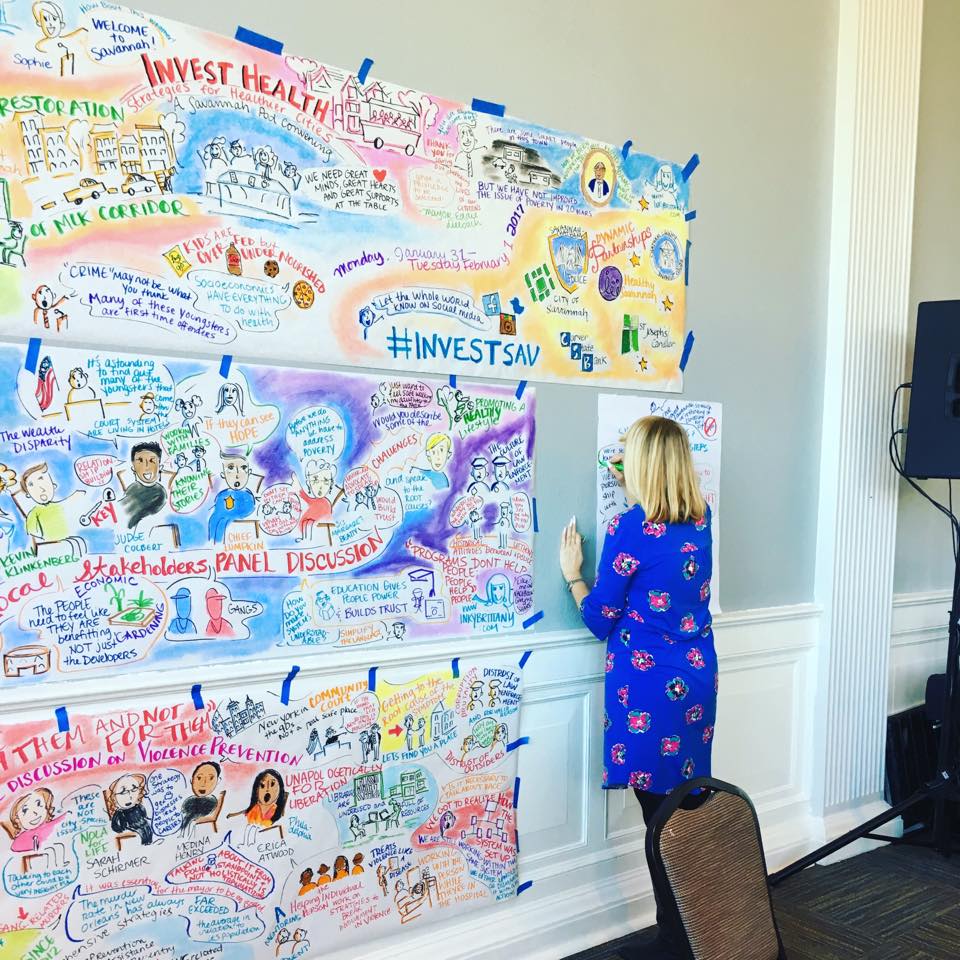 CC: That’s really interesting too, because you were doing this in Milledgeville and coming back to Savannah to work with certain clients. How did you scale up this business? Scaling up as a small business can look so different.  BC: In the beginning, it took a lot of me volunteering it and telling people. Basically, just saying do you mind if I do this and me taking a lot of initiative. There a couple of organizations up front that really supported me. One was Georgia College where I was living in Milledgeville, but a big one was Emergent Savannah here. I would come home once a month or for every other meeting and became kind of associated with that group. All it took was for me to do one meeting or do it one time, and then people would immediately come up afterwards and express their interest in the work. The exposure that I got through that in the beginning, and it didn’t take long before it became clear that this was what I wanted to focus on full time and that Savannah was a network of people that I could do that with. CC: If you look at your client list, it’s huge. Can you talk about some of the clients that you work with?  BC: I have been doing some work recently for a lot of universities, as well as a lot of philanthropies. In the past year, I did my first job with Gulfstream. In the past couple of months, I’ve been to Stetson University in DeLand, Florida, Phoenix, Arizona for the Robert Wood Johnson Foundation. The Robert Wood Johnson Foundation and the Reinvestment Fund have a national initiative called Invest Health, and 50 mid-size cities across the U.S. are represented. They all got grant money to do do local projects to meet needs in their communities. Their national convention was in Phoenix, so I went to that. When I was there, I met some people from Michigan State University so I ended up getting an opportunity to go to Flint to work with them and teach graphic recording. But a lot of times, I’m going to do a strategic visioning or a board retreat. A lot of the work I do is in Atlanta, Atlanta Jewish Film Festival, a lot of disability advocacy groups, Georgia Microboards. I’m kind of going all over the place right now. Sometimes it’s the me recording and then sometimes people are saying, “We would like to use this skill in our organization. Could you come show us and teach us the tool of visual recording?” I’m sharing and trying to get other people excited about doing it.   [gallery ids="86219,86215,86214,86216,86220,86221"]   CC: Would you say that while your business is graphic facilitation, a huge part of it is education and teaching people how to use this skill? BC: Very much so. I mean my quote services that I offer are the facilitation and the graphic recording when I come to your meeting, and listen and do live illustration to scribe the notes, or I lead the meeting using visuals. Education, there is a lot of that because so many people don’t … If there were more hours in the day, I would spend in educating people more about what visual practice is and how it can make people think and work better together. 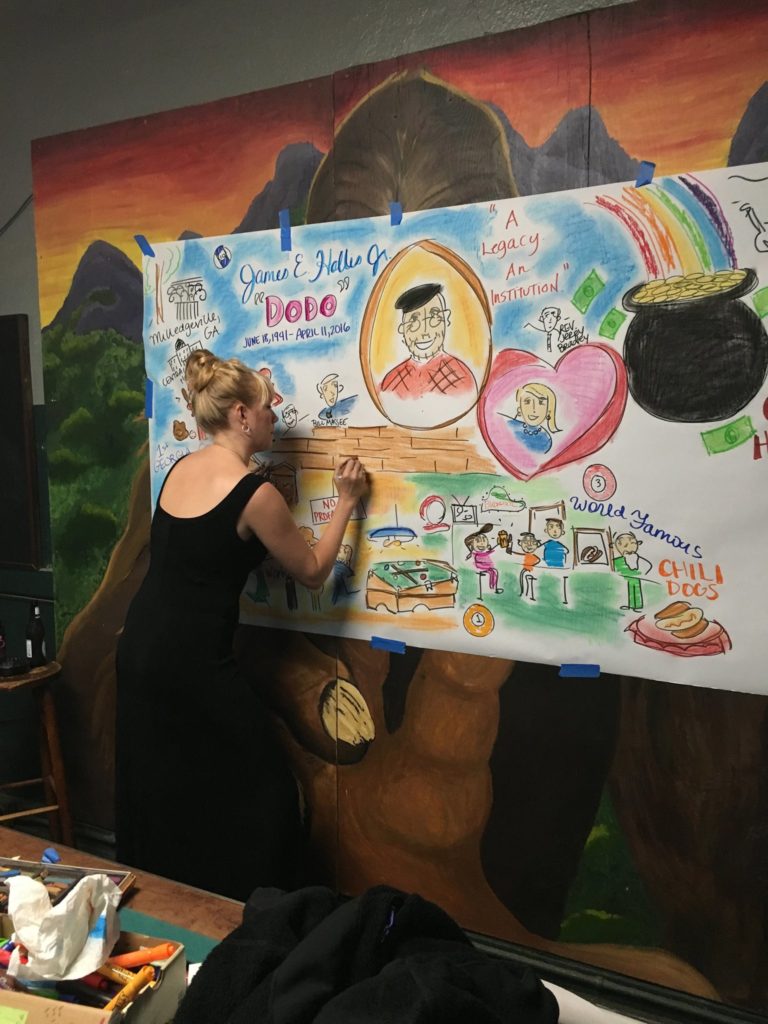 CC: I think that’s a big thing, too, because we have all sat in our share of boring meetings. I think when people see your work they’re like, “Oh, my god, this is amazing,” but maybe the thing doesn’t click yet. How to describe that click moment? How do you tell people this can actually help? BC: The research around how visuals are tied to better recall and memory are astounding. There’s nothing but research that says that so many people … Of all the different kinds of learning, not every last person is a visual learner but so many people are that it’s obvious how more people will remember and how more deeply they will engage with the content. I’m just going to the meeting to I’m listening and I’m recording. Using visuals to facilitate or to follow through after it’s over, I use the graphics and I try to send people follow up mail and cards to where they see their images and their words mirror back at them and it creates a feeling. That personalism is what my brand is really about. Imagine having a conversation with somebody and four days later opening an envelope in the mail and seeing the most memorable point to that conversation. People are really not used to that. It doesn’t happen a lot anymore in this day in age so that’s how I’m trying to use visuals beyond just recording once. For more information, visit www.inkybrittany.com]]>