Savannah, GA (January 17, 2023) – On Saturday, January 28th, Zach Dennis of Savannah Morning News will host a fireside chat with Pote Baby, Bryan J Noel, and Donny Slater of Club Hous Works for the final GRIT Conference keynote session. The fireside chat is titled Gettin’ On: The Intersection of Music, Media, and Tech and is one of over fifteen sessions to take place at the conference. GRIT is The Creative Coast’s business, technology, and art conference happening on January 26-28, 2023 at the Savannah Cultural Arts Center.

The Club Hous Works trio is set to speak on how they are building their indie multimedia company, breaking into the entertainment industry, and where they see the future of music technology heading. 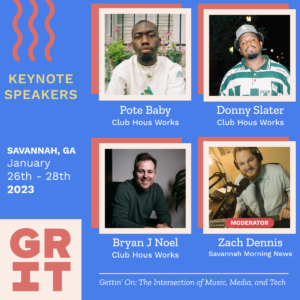 Pote Baby is a Savannah-born and raised creative and a partner in Club Hous Works. His music has amassed over seven million streams across platforms and is regarded as a great show of his creativity and versatility by Pigeons & Planes and other outlets. Pote Baby has performed on festival lineups such as Day N Vegas Festival and A3C Festival as well as on tour with Earthgang in 2022. Pote Baby’s creative vision is to bridge the gap between Savannah and the global entertainment world by opening up recording studios, live performance venues, art spaces, and movie theatres in Savannah and bringing brands to his city through partnerships.

Donny Slater is the founding partner of Club Hous Works, a company he started in 2019 along with managing Pote Baby. Together with Pote Baby, he has quickly scaled the business through a partnership with music technology company Soundcloud. Slater started his career as a music video director and photographer, which led him to become a film producer and graphic designer for artists and labels like Wiz Khalifa, Epic Records, Lil Yachty, Sony, and 21 Savage. After working on countless projects, he founded a marketing agency with two partners that quickly scaled to over a dozen full-time employees that bolstered a roster of clients such as ForbesBooks, Spotify, Ryder, and Emory University.

Bryan Noel is the head of Club Hous Media and works with his team to develop and launch engaging podcasts, video content series, and branded content. As a partner of Club Hous Works, Noel oversees operations and finance for all verticals. He has served as a management consultant focused on brand and process with experience informing go-to-market plans, early-stage company growth strategies, and global brand creative executions. He’s partnered with more than 50 organizations, including the RIP-IT Sports, American Cancer Society, Ogilvy and Mather, SoundCloud, Goodwill, and Blue Cross Blue Shield, to design strategic recommendations that meet organizational objectives.

The Gettin’ On: The Intersection of Music, Media, and Tech session will be moderated by Zach Dennis. Dennis is the arts and entertainment editor for the Savannah Morning News and Do Savannah. He’s worked for nearly a decade on the multimedia side of the newspaper industry and has been in Savannah since 2016.

About the GRIT Conference

The GRIT Conference is an event organized by The Creative Coast in Savannah, Georgia. The Savannah Economic Development Authority (SEDA) is the Presenting Sponsor of the two-day conference, which features and connects leading designers, technologists, entrepreneurs, and thought leaders from Savannah and beyond. Sessions showcase Savannah’s achievements in business, tech, and the arts, address our toughest challenges, and discuss emerging trends with the goal of providing individuals with access to new ideas and people to spark their momentum. Learn more at www.thegritconference.com.

Kait has been writing for The Creative Coast since 2014. A self-proclaimed "startup hype-woman," Kait is passionate about storytelling that shines a light on new ideas, innovation, and entrepreneurial opportunities in the southeastern Georgia region.

View all posts by Kait Lance →