don’t they do. The self-defined visual communications company gracefully juggles the balls of advertising agency, design studio and full-time creative juggernaut. Since 2004, Clark Creative has made creative matter – playing a key role in the launch of new and existing business in the region. They’ve worked with economic development authorities, city & planning developers, public transportation, and a range of clients from real estate developers to small batch pimento cheese makers–and this isn’t even to mention the creative endeavors, like Make Savannah and Salacia Salts, that owner and principal, Cari Clark Phelps, has grown. To say that Phelps is a one-woman rocket machine of innovative, awesome creative wonderment is an understatement. We were lucky to sit down with her and talk more about Clark Creative’s growth over the past few years, as well as the benefits of  Savannah style business as a way to effectively scale what you love doing and make a living from it as well.   Creative Coast:  Talk a little bit about the genesis story for Clark Creative. Cari Clark Phelps: Clark Creative started after I had been working for a printing company for a few years, right out of college. I got hired before I even graduated. And I saw there was a need to help support SCAD students that were printing things in the Graphic Design Department. So, I ended up working there, and growing the printing department. Doing that, I realized that I was more on the receiving end, and it was more of like problem solving, troubleshooting, putting fires out, “Can you hurry up and get this printed?”, rather than being design focused. Over time, I got more into the design and realized that’s really where I enjoy working. I also was managing several people there, and I think I was 22 or 23 years old. And then they grew into a second division, and I thought, “If I can do this for the company that’s been around for 20 or 30 years, I could certainly do it for myself.” And I did feel really confident in doing that when I decided to do some freelance. [gallery size="medium" ids="86016,86011,86017"] Also, I would leave my house, and walk down Broughton Street, and pass somebody, and then say, “Hey. I’ve been meaning to get in touch with you.” And I’d give them my card, and the next afternoon, I had a job working for them. I felt like no matter where I went in Savannah, whether I was sitting in a square, or out at lunch, meeting with friends, that there was always this positive environment, and people that wanted to hire me and work with me. So that, I feel like, is what really kick-started me leaving that job and starting Clark Creative. It’s interesting just to think that it wasn’t really my plan, but it was more just the nature of the city, and how it was so easy to interact with people that really, I feel like, pushed me to start this business.

CC: So where are you are at now in your business?  CCP: There are eight people that work here, and that includes a Director of Digital Strategy, a web developer, and a digital designer, as well as graphic designers, and an Engagement Manager. Not only do we continue to focus on that packaging and branding side, but the web side of the business is growing. In the past, we were very heavy on the design, build, and high-end residential and commercial developments in real estate. And then in 2008 and 9, things kind of like went down hard. We fortunately, saw an uptick in other types of businesses, because we were diversified enough. We have remained strong and focused on accelerating brands. For the next 10, 20 years, our goal is to be the partner in the marketing and strategic sides of our client’s business, whether they have a marketing department in-house, or they are a manufacturer in the region, with 150 employees. We find a lot of companies do not have someone really focused on the creative side. With everything we do, every project we take on, we make sure that it has a great purpose, and a benefit, and we’re not just checking a box, for example, “Going to a trade show and need a booth.”, but more, “Tell us more. How are you going to get people to come to your booth? How are you following up with them afterward?” [gallery size="medium" ids="86006,86009,86008"]   CC: I know you mentioned graduating from SCAD, and then really taking on this role there but, why you decided to stay in Savannah, and then start your business in Savannah. You could have gone to New York, or San Francisco, or Portland, or wherever is most sexy and cool right now. But what about Savannah, made you like, “Oh, yeah. Like this is the place.” CCP: To be quite honest, it didn’t come that easy. I think that I landed a job right before I graduated college, while all my friends were scrambling to get their portfolios together. So I accepted that thinking I’ll have to spend another couple years here. I thought, “I’ve only been here for three years. Why not just invest another year or two, and see what happens?” But all the while, I was interviewing for jobs in D.C., out in California, in New York, and even thought about maybe moving back to Florida, to Tampa area. I’m from Sarasota originally. And then I started interviewing and realizing that it was just even a nightmare just trying to plan where these offices were located, and the travel, and transportation, and just the reality of it. I realized that it really was the place for me. As I mentioned, walking down Broughton Street, and having that connection with people, people wanting to work with me, wanting to help, or being very accepting. And then, in addition, a lot of people come here and retire. So, you have this wealth of talent, people that have money, that are coming back to Savannah, that want Creative, they want access to great visuals and marketing, but don’t necessarily want to pay big city prices. They want to work with someone local. So, I think up until the last year, but it seems like up until the last five years, that it was not the thing to stay in Savannah, and now we’re seeing that the Spark Creative people are wanting to move from Chicago. My newest employee just moved from California. He wants to work on this coast. He wants to be near the water, and he wants to be in warm weather. So we’ve had three employees in the past couple years that have moved from what would be “cool cities” that just, even at their young age being in their 20s or early 30s, understand that there’s a great quality of life here. 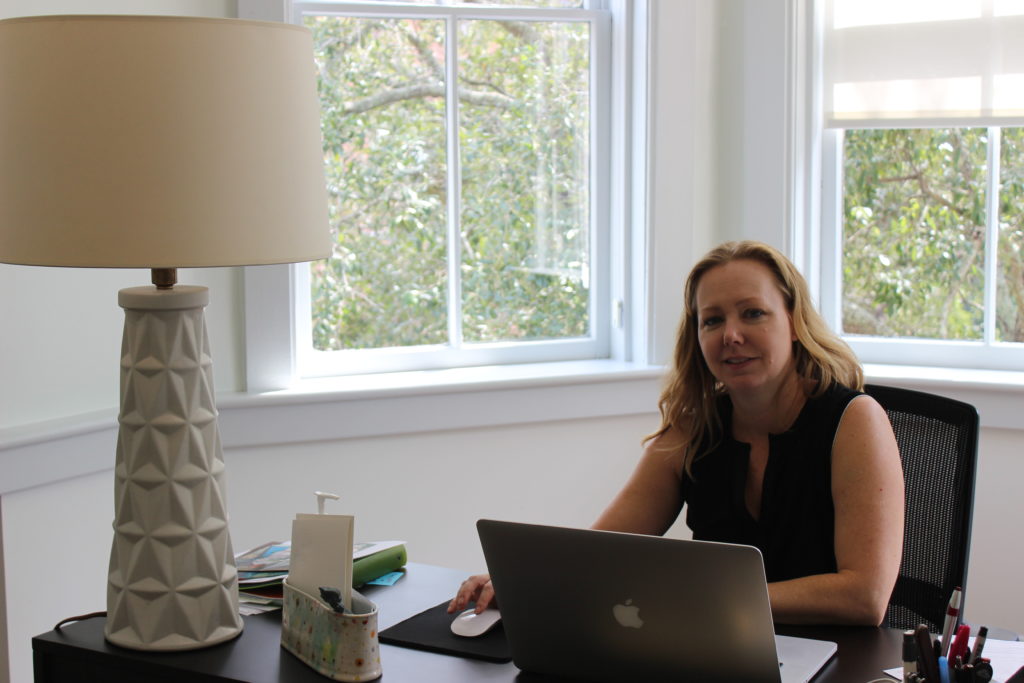 CC: So as people are sort of looking at Savannah and being like, “Oh, I can go there and start my business. I don’t know.” They’re on that ledge. You can answer both of someone who, again, started a business here and was like and was not certain on like “this is what I’m doing.” What is it about Savannah that you think that it’s hard to see at first, but you think it’s really enriching about being here? CCP: I think one of the coolest parts about being in a business in Savannah is the environment. Our office building’s downtown. We are in a renovated townhouse. It feels very comfortable. Some people even think I live here, which I’m like, “No. Clearly, it’s a business.” But I think, just being able to have that accessible, the access to being a block away from one of the most beautiful parks probably in our entire country, to be able to walk to lunch, to be able to walk down a brick pathway, and meet friends in a square for lunch. I think that that has been a big part of it. I think that we can be successful in Savannah. We might not have huge clients. We might not work for Coca-Cola, and we might not work on the 50th floor, but I think it’s way cooler to be like, “I work on the second floor, and there’s a big, huge oak tree out front, and I can walk to work. I can walk my dog to work. I can meet my husband for lunch, or friends.” I think just the close-knit nature of downtown Savannah is great and to be able to leave work at five or six, and go out to the beach, and watch a sunset, or go surfing, whatever it is, it’s pretty cool to know that you can have sort of like town and country all at the same time, which I think really helps inspire creativity. To learn more about Clark Creative, visit: https://clarkcreativedesign.com]]>