Tucked away beside the Skidaway Island Aquarium sits the  UGA Skidaway Institute of Oceanography where Catherine Edwards has brought a new meaning to underwater research. As a member of the faculty for University of Georgia’s Department of Marine Sciences at Skidaway, Catherine interfaces with multiple graduate and undergraduate students in STEM majors throughout the Georgia University Circuit. 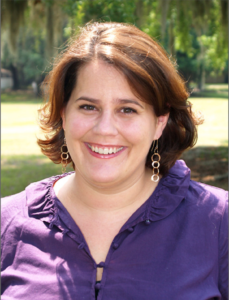 Catherine Edwards is an Associate Professor and researcher of Coastal Physical Oceanography and Marine Robotics at UGA Skidaway Institute of Oceanography. She studies the waves, currents and temperatures of the ocean and how external environmental factors affect our oceans. There are several techniques and instruments used to retrieve their data and measurements, but Catherine shared with us the wonder that is Autonomous Underwater (Marine) Vehicles. She told us that she had been working with this technology for around 15 years now.

These AUVs are not what you think: AUVs are shaped like torpedoes and approximately the size of a 5 foot tall person, weighing around 150 pounds. And no, they don’t have propellers or moving fins. The magic of these beauties is that they change their internal buoyancy to maneuver throughout the depth of the water, assisted only by small wings. Catherine further explained that the “gliders” function by sucking in water through the nose of the vehicle to make them heavier than the water surrounding them. The glider’s battery then shifts forward a few inches to leverage the internal weight of the glider, making it tilt forward and able to sink.  Finally, when the glider hits the ocean’s floor and is ready to come back up, the water gets displaced out of the nose of the glider, making it lighter, and the battery shifts backwards to elevate the front of the glider. 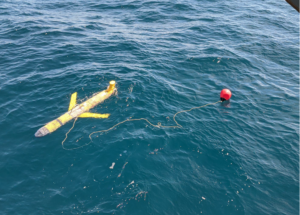 The gliders move at a typical walking pace for a person, but the main driving force in their movement is the current in the ocean, which happens quite often in our ocean system, especially as the glider moves within the Gulf Stream where the current can move at  ten times the speed of the glider.

This incredible, energy-efficient system allows the gliders to maintain themselves in the ocean for up to a month collecting data. Depending on the battery life, the gliders can sometimes be out in the ocean for several months at a time. To which you may be thinking, how could the operator know how the glider is doing or where it is if it has been out for such a long period of time? Catherine described that gliders do in fact have a way to “speak” to their operators.

The gliders have a satellite phone built into the tail. Every 4-6 hours the glider comes to the surface  and deploys a bladder to hold the satellite phone above water,  allowing it to ping to the servers in Catherine’s lab. It delivers its name, GPS position/coordinates and asks what the operator would like it to do. That includes:

This is possible through scripts that are dialed into the satellite phone, which allows the operators to contact the glider back and forth. Oftentimes operators will ask the glider to send the sample, or subscript, of the data to the lab so they can check in to see where and what the glider is doing. With that information, the researchers can decide whether to adjust the glider’s mission or keep it in line with its original agenda. 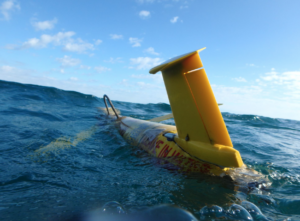 Modifications to the glider can be made, including adding a small propellor so the glider can move through different environments, “swim” closer to the surface if need be, or go at higher speed.

One innovation that Catherine and her team have made is using the gliders to optimize what research and data they want to collect. One exciting example of such innovations is using gliders to track hurricane patterns throughout the ocean. Heat in the ocean is a large factor in causing hurricanes to grow and strengthen, and with the help of the gliders, researchers are able to measure the heat index further allowing them to monitor when a hurricane is coming or about to grow. That is a huge game changer because having data earlier would allow more rapid news and storm warnings, enabling coastal residents to decide whether they should stay or evacuate and when.

Within the last 40 years, the technology surrounding hurricanes has grown tremendously. Forecasters are now able to tell with a heightened sense of accuracy, how hurricanes will travel and where they will hit. But Catherine wants to know more than just where the hurricane is going; she wants to know how bad it will be and its strength as it travels. The significance of knowing the wind and water speed is vital to knowing if and when to evacuate.

“Rapid intensification of the hurricane is what we want to be able to gauge,” Catherine explained. “The average air speed for a hurricane forecast is within 14/15 miles per hour, which doesn’t sound like much, but the difference in 15-30 miles per hour could mean the difference between a category. You might say that you are staying for a [category] three and leaving for a [category] four.” Catherine further explained the necessity for this research ability: “That difference is how emergency services and people make decisions about evacuation and other safety measures.”

They need to know where the heat is and its distribution to represent the ocean which would allow hurricane data to be that much more accurate. The gliders are not only able to measure the ocean’s heat and distribution, but also to communicate this information every 4-6 hours. Catherine’s lab can then translate this data to other associations to improve the hurricane models in real time and alert surrounding areas.

The gliders are most beneficial around the Gulf Stream, where the warmest part of our waters are and, inconveniently, where most other hurricane data falls short. The gliders are able to measure what the other resources cannot thereby improving forecasting models.

Our next question was how do they get the gliders from the lab into the ocean. Catherine told us that the university works with several local offshore charters to deploy the gliders. The “big blue boat” that you might see floating around the area is their research vessel, which is part of a national fleet of scientific research vessels. Between their own vessels and partnerships with these local charters, the UGA researchers are able to deploy, maintain and repair their gliders from Florida all the way to North Carolina. 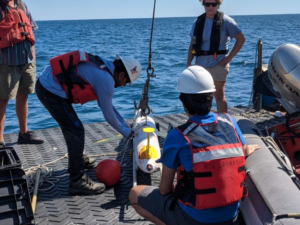 The team typically takes a glider out in the ocean, runs a few operational tests to make sure the glider is functioning properly then has it in the water collecting data within an hour.  They can also conduct a remote deployment where A boat takes the gliders into the ocean, signals the lab that the glider is in the water and waits for the lab to give them the OK to leave the area and let the glider do its thing.

Catherine’s team has partnered with many other teams and on/above water vehicles to tackle “land, air and sea” issues and be a part of some really extraordinary projects. There are several baseline missions running throughout the year outside of hurricane season, but they have received additional funding to conduct these expeditions in hurricane season. One expedition was a volunteer effort in 2018 when Hurricane Florence made its appearance in North Carolina. The UGA team had gliders positioned off the coast of northern South Carolina and North Carolina where the hurricane passed through. The equipment in North Carolina predicted and fixed a 10 degree Celcius error in temperature near the ocean floor. That discovery happened in real time as the hurricane was approaching and resulted in enhanced predictions for the hurricane model as a whole.

Outside of hurricane and ocean pattern tracking, Catherine was happy to tell us that she has several other side projects in motion. Gray’s Reef National Sanctuary has been a long time partner of Catherine’s and they are currently working together to use gliders that utilize frequency to monitor fish populations. The DNR and Gray’s Reef National Sanctuary has implanted these devices in fish colonies to allow the gliders to track and follow the frequency of those devices throughout the ocean. They even have technology that enables the team to hear the exact sounds the fish are making which allows a better understanding of the colony’s rituals, spawning noises and other sounds. 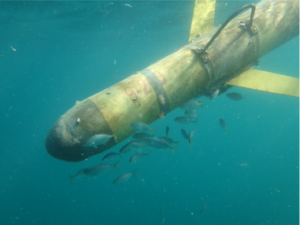 Talking with Catherine about the Underwater Marine Vehicles and the projects her team is working on was truly incredible. We are able to see what this looks like in real life thanks to  Catherine  Edwards, whoo has graciously allowed us to share some of the team’s photos throughout the article.