I’ve had the opportunity to conduct numerous virtual interviews during my time with Creative Coast. There are certain things that I miss out on that only a real interview can provide, but I always have fun seeing the space that my subject is in. Sometimes it’s a quiet office, with diplomas and certificates decorating the wall. It could be on the family computer in the living room, with the kitchen in the background. But Grant Anderson is the first person I’ve ever interviewed that is driving a car as we Zoom on Tuesday.

He’s making the drive between Metter and Bluffton on this particular day to fulfill a surprise order at Lowcountry Fresh Market and Cafe. The market sources all of its products locally between North Carolina and Florida.

“They say their whole goal is to have farm fresh items, and that’s exactly what we do,” he says.

Anderson grows regular food. There are no special greens with outlandish names in his inventory. He grows kale, collards, lettuce, and other leafy vegetables. But his approach to farm-fresh produce is unconventional by traditional standards. He grows his crops inside refrigerated shipping containers using hydroponic water systems.

Hydroponic farming suspends the plant roots in a solution of nutrient-rich, oxygenated water. Plants grow faster in this environment due to the high amount of oxygen they receive. But Anderson’s plants also grow a little…differently.

“So you get what’s known historically as a tough, bitter green when you do collard greens,” he says. “But when it’s grown indoors, you get a really tender, sweet version of that plant. It’s changed perceptions for people who historically will say they don’t like collards. It takes a lot less time to prep, you don’t have a bunch of holes because of pests, it’s not yellowed, it’s not tough, it’s chemical-free. It’s a lot of things I thought that added value to this product.”

Anderson uses this growth process to quickly expedite his produce’s maturation. He says he can take a seed to a full head of lettuce within six and a half weeks. But he didn’t get to this point in his business overnight, despite his attempts to. 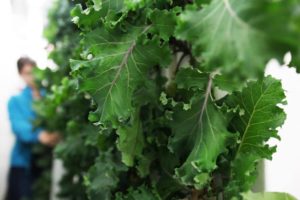 “I went from a banking and finance background to farming like that,” he says, snapping his fingers. “I’d never considered it a business opportunity because farmers struggle to make money, and have to depend on the weather.”

He’s grown his customer base over the years, pursuing restaurants and building a name for his product at his stand in the Forsyth Farmers Market.

“Now we service kitchens and golf clubs, and I’ll have little church ladies swing by after church for a bag of salad,” he says proudly.

Anderson’s business has not been without growing pains, which continue to be felt. He cites a need for capital, which is a constant problem for a business the size of Better Fresh Farms. But he boasts an impressive product line that is readily available throughout the year.

“We’ve had a harvest of produce for over 240 consecutive weeks,” he says. “That’s five full years of pulling produce out of those containers.”

Anderson doesn’t just pull produce, though. He is his own delivery driver, accountant, online sales and marketing professional. He says that when you start your a project like his, you need to be ready to persevere if you want to succeed.

“There are days where I question the decision,” he admits. “I left a good solid job behind to grow lettuce in shipping containers. So there are some who think I may have lost my mind for a while.” 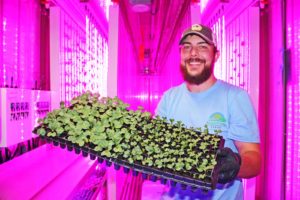 But it was passion that drove him to pursue his dream of making a difference in the way people eat.

“I had seen my grandpa and grandma feed people when I was growing up,” he says. “And I saw the happiness that brought them. That’s been my driving force for the past five years. I still think there is value in what we’re doing.”

Check out what Grant and his team are up to here.